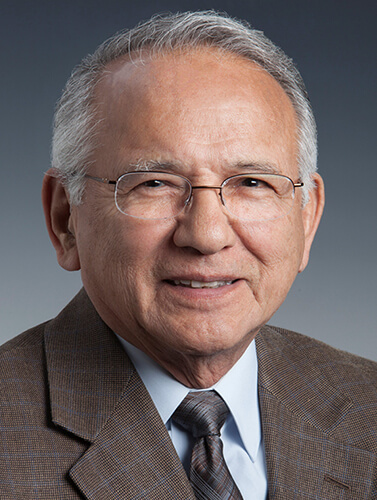 The College of Business and Public Policy recognizes Athabaskan leader Emil Notti for his induction into the National Native American Hall of Fame during ceremonies on November 6, 2021 at the First Americans Museum in Oklahoma City, Oklahoma.

Emil's advocacy for Alaska Native people, through his commitment to the passage of the Alaska Native Claims Settlement Act (ANCSA), has forever changed the landscape of Alaska.

He was the first President of the Alaska Federation of Natives (AFN) and held numerous roles in the State of Alaska administration, which benefited all Alaskans. Emil served in the United States military, and has given so much to Alaska Native people and the nation through his work.

His contributions continue to this day, particularly in helping to shape the next generation of leaders. Our students have benefited from his participation in CBPP's Alaska Native Business Management program. The faculty, staff and students at CBPP congratulate him for this much deserved recognition.

Emil Notti is just the second Alaska Native to be inducted into the National Native American Hall of Fame. The first was Elizabeth Peratrovich, who was inducted posthumously in 2019.

The National Native American Hall of Fame was established in 2016 by James Parker Shield (Little Shell Chippewa) to bring greater awareness to the achievements and significant contributions of contemporary Native people in society.

The eight inductees of 2021 “are the superstars of Indian Country in their respective fields,” Shield said. “They have each made a mark and blazed trails not only in Indian Country and their own tribal communities, but have made long-standing impacts to the fabric of American life.”