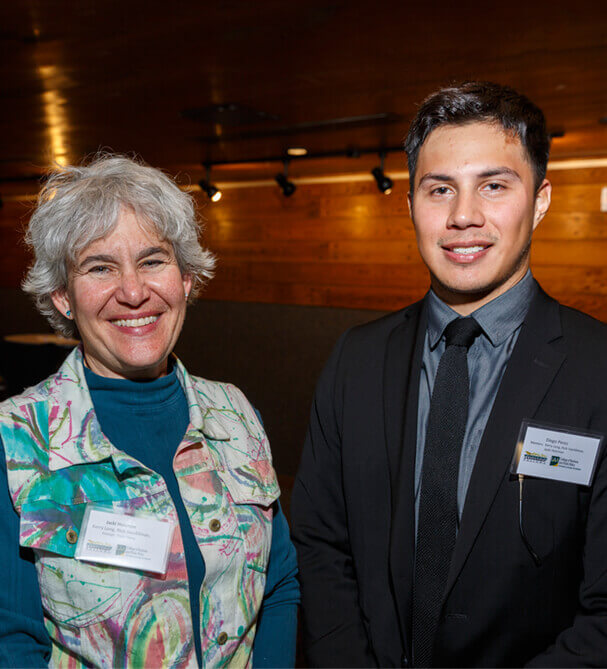 2016-17 Tom Case Leadership Fellows Mentor, Jacqueline “Jacki” Holzman, was named one of the three recipients of the University of Alaska Anchorage’s (UAA) 2019 Alumni of Distinction Awards. Holzman is the winner of the Alumni of Achievement Award which honors an alumnus or alumna who has attained prominence through his or her industry, profession, or voluntary service and demonstrates sustained excellence, integrity, motivation, and dedication in the realm of their expertise.

Holzman graduated from UAA with a Master of Science in Environmental Quality Science in 1992. Her 27-year career with the Federal Aviation Administration (FAA) has brought her to her current position as Deputy Regional Administrator for the Alaska region of the FAA.

Former Tom Case Leadership Fellow, Diego Perez (2016-17), praised the great positive impact Holzman made on him and the key role she played in his aviation career. Perez expressed that Holzman’s emphasis on volunteering with the youth of local Alaskan communities inspired him to devote his time to youth organization teaching to give back and guide those he teaches as she did for him. She was one of two recipients of the Mentor of the Year Award (2016-17) for her outstanding work during her time with the program.

Holzman has continued to contribute by staying actively involved in the Tom Case Leadership Fellows Junior program. She has mentored students in the program for the past three years in public speaking and has participated as a judge in their public speaking contests. Her commitment and efforts contributed to the College of Business and Public Policy receiving a 2017 Anchorage School District’s Spirit of Tomorrow’s Award.

Her advice for the next generation of Alaskan business leaders is this: “Authenticity is really important. Being true to yourself is being what is going to entice people to follow. Creating a shared vision and capitalizing on people’s strengths is the best a leader could do.”

Please join us in congratulating Jacki Holzman and thanking her for her incredible contributions to the CBPP and our local communities!

To learn more about Holzman’s recognition or her time as a Tom Case Leadership Fellows Mentor, check out the article by the Anchorage Press or her interview with Diego Perez.

For more information on the program, see the Tom Case Leadership Fellows page.