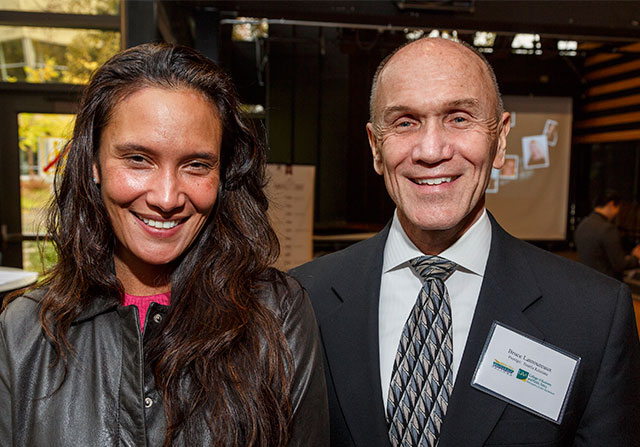 CBPP’s Leadership Fellows Program pairs high-performing CBPP students with a mentor in the Anchorage business community, giving students the opportunity to learn about real-world leadership from local business leaders. This year’s cohort includes 22 CBPP students, called protégés, and their mentors. To begin the program, each protégé interviewed their new mentor, and every week, we will feature one of these interviews with the mentors, who share their thoughts on leadership. This week’s featured protégé/mentor pairing is Nantia Krisintu, who completed her MPA this past December, and her mentor, Bruce Lamoureux, who is the President of Providence Health Systems Alaska.

Tell me about how you worked effectively under pressure.

I tend to be motivated by stress and manage not to feel overwhelmed with conditions where there are either a large number of or high-impact deliverables or decisions. I also ensure that I tap into others on my team who may have knowledge, experience, or talents that I don’t posses who can help me produce a better deliverable.

How do you handle a challenge? Give an example.

I generally dissect the challenge into its component parts to identify approach, prioritize interventions, and execute in order to get the desired outcome. For example, the Kodiak Island Borough recently received a request to have the ANTHC lease the hospital facility in Kodiak. Providence has held the lease for nearly 18 years, and the unexpected interest by the consortium has precipitated a flurry of activity. In response, I assembled stakeholders, and together we set out to understand all the issues and respond in a manner that would be compelling. Compelling for the continued lease to providence. That is a current real-life incomplete challenge, the results of which probably take a few months.

Have you ever made a mistake? How did you handle it?

I had a mentor who in conversation one day asked if I knew why she was the CEO. She said, “Because I’ve made more mistakes than you have, and if you hurry up and make your own, you too can be the CEO.” Most of us in executive roles have made many mistakes, but the challenge is to learn from those mistakes, try not repeat them and avoid major blunders, and speak freely and openly about them, so that others may learn from some of them. As well, this models vulnerability and learning in the organization.

Give an example of a goal you reached and tell me how you achieved it.

I established with our senior executive council a goal to develop and implement a talent development program. The concept design and initial execution occurred in 2011, and now four years later, we continue on the journey. The program is flourishing and is expanding from an original cohort of 20 to 170 leaders.

Describe a decision you made that wasn’t popular and how you handled and implemented it.

Suddenly decided that mandatory flu vaccines would be good for our [Providence] community, our patients, and co-workers. And it would set an example in the community. My preparation for the announcement included speaking with select stakeholders in order to avert a misstep, and in doing so, I failed to get into the stakeholder pool adequately as far as depth and breadth such that the announcement was received poorly and ultimately caused me to withdraw the mandate. The individuals most opposed were clinical professionals whom I would have expected to embrace the idea, because of their own knowledge. Nursing core was queried, everything seemed to be ok, and then the mud hit the fan. Ask the right people, enough people, what ever the relationships may be and manage the change.

Give an example of how you set goals and achieve them.

Typically, in goal setting, my role requires the involvement and vesting of others. In order to vest others, my approach is to introduce an idea for goal a that I’m considering setting and solicit input with stakeholders about the relevance of the goals so that we arrive at a common understanding of why. With an understanding of the why, we can then talk about what and how and then hone in on what the specific outcome looks like. It’s one thing to set a goal for a myself, but bigger goals necessitate the involvement of others and broad impact, and without the benefit of dialogue, the ability to execute for others is diminished. With the flu vaccine, the goal was to have 100% get the vaccine or have a legitimate reason not to. I failed to adequately secure stakeholder vesting and develop enough of a runway around the why. In any organization, there is a subset of individuals who are not going to do anything if they’re not mandated to. It’s the nature of any large group of people, but the issue is can you co-opt them prior to mandating a behavior.

Give an example of how you worked on a team.

One of the committees I sit on is the Health Care Operation Committee at the system level, that places me as a peer on team of regional executives from different states. As a team, we will take on an initiative, and we will take on projects and implementations of different sorts. It requires us to collaborate not just as unit but also within our regional teams. There are multiple topics to execute against an idea or project of some sort.

Did you have anyone you relied on for mentorship/solid career advice? If yes, what is the most important leadership advice they shared with you?

See the question “Have you ever made a mistake?” Without realizing it at the time, it was shared with me. It has a number of layers. It is superficially about making mistakes and becoming a CEO. But deeper layers include ability to acknowledge mistakes, willingness to be vulnerable and expose your limitations, frailties errors in judgment or otherwise, and to speak those out loud, so that people around you—especially those that may be younger—witness those behaviors, actions, and words, and in turn can walk a simpler path than individuals who may have signed on to the great American myth about the great Omnipotent captain.

The College of Business and Public Policy is excited to host this unique mentorship program and is grateful for our excellent protégés and for the outstanding business leaders who have chosen to participate as mentors.